A capital campaign is a highly effective method of fundraising large amounts of money, typically for large, one-time projects. In the case of fraternities and sororities, capital campaigns are most often used for construction or upgrades to Greek house buildings.

As you may know, American college Greek letter societies are a form of student self governance that have been around since the early 1800s. While most Greek houses have been updated since their original construction, you wouldn’t always guess it. We have worked with dozens of Greek organizations across various campuses who decided to use a capital campaign to raise funds for the construction or renovation of a new chapter house.

There are a variety of benefits that can result from a new chapter house, including improved cooking facilities, improved study areas to help students to excel in their classes, and increased bedroom numbers to allow for a greater number of students to be comfortably placed in a chapter house. Whatever the reason your organization may need for a significant upgrade, here are some of the basics of taking on a capital campaign that will help secure the needed funding. 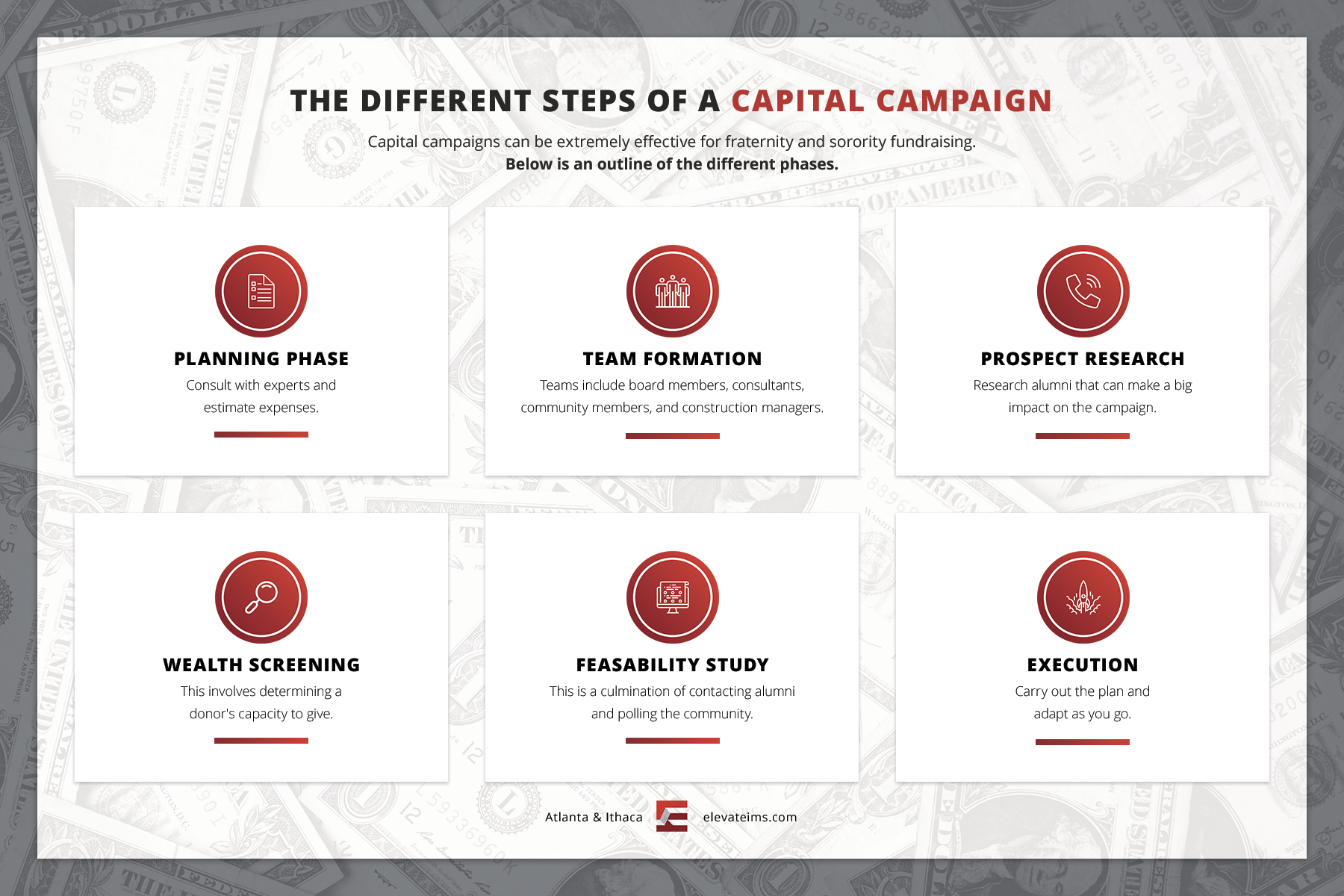 Deciding If You Need A Campaign

Naturally, the first step in a capital campaign is deciding if it is what your organization needs. Once the board of directors for a fraternity or sorority makes this first decision, the door is opened for our fundraising team at Elevate IMS to take the reigns and begin the initial research process through a feasibility study.

The goal of the feasibility study is essentially to determine if your organization is ready to take on such a large project, and if it is possible to achieve the outcome that you are looking for. Throughout the study, we will use a SWOT analysis to determine the strengths, weaknesses, opportunities, and threats that your organization may be facing throughout the capital campaign.

If the results of the study show that your project is too large of an undertaking given the current circumstances, the capital campaign can be pushed back to a later date, or we can collaborate to downsize in ways that can still be impactful for your chapter and local community.

As part of any capital campaign, one of the next steps that must be organized before too much progress can be made is to find specialists, assign roles, and organize a team. Capital campaigns are never a one-man-show.

The goal and specifics of your project will determine who all needs to be involved. Generally, board members, outside consultants, community members, architects and construction managers, and community members will all need to play some role in the campaign.

In some cases, getting away from the daily routine and organizing a retreat for your board of directors and key members is one of the best ways to formulate a team and lay out the plan for a capital campaign. Whether it be a golfing retreat down south or a high elevation retreat in the mountains of Colorado, our event planning team are experts in the areas of choosing a location and making sure that your group has the best experience possible. Our consultants can also be present at these retreat meetings to ensure that planning the details of the capital campaign goes as smoothly as possible.

Based on the feasibility study, we will always decide on a hard number as a fundraising goal before moving any forward. For Greek house construction and renovation projects, this number can fall between several hundreds of thousands of dollars to multi-million dollar amounts.

Setting the goal will involve collaboration from all of the team members to ensure that all costs of the capital campaign are accounted for. Construction costs, permit acquisition costs, furnishing costs — you can imagine the meticulous detail that is required in this phase in order to set an accurate yet realistic fundraising goal.

Realistically, thorough research is a step that will cover the capital campaign process from start to finish. In regards to Greek fundraising, the research process will need to involve meeting with major donors and volunteers. Having stakeholders who are highly invested in the project from the very beginning is an ideal way to kick off a capital campaign.

More than half of the funds raised for your capital campaign will likely come from major donors, who our organization can meet with face-to-face during the initial stages of fundraising. The research phase and SWOT analysis can also help uncover opportunities to meet with new donors who may have not been originally accounted for.

At Elevate IMS, we work with the board of directors of any Greek organization to build a solid plan for capital campaigns, but that plan may need to be tweaked slightly as the capital campaign progresses through the timeline. It is important for the entire team to remain nimble during the execution phase in order to adapt to changing needs from donors and any hiccups that might occur during the construction phase.

Throughout the execution phase, it is also crucial to follow best practices and stay in close communication with donors. Offering donor incentives, keeping them updated on the progress, and showing gratitude throughout the entire process will help build strong relationships, and show that your organization is thankful for the people that help impact the lives of undergraduate students and the local community.

If you are interested in learning more about what it looks like to take on a capital campaign through Elevate IMS, we have put together an entire resource page detailing our experience through various on-campus case studies across the country. We have helped organizations raise more than a million dollars on numerous occasions, and would be happy to begin a feasibility study for your chapter this year.  If you have any further questions, don’t hesitate to reach out today!